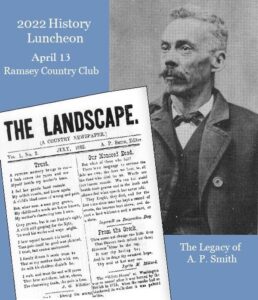 Co-sponsored by the Historical Society of Rockland County and the Northwest Bergen History Coalition, this annual luncheon will feature a lecture on the legacy of Alfred P. Smith.
Many have heard of A. P. Smith, the African American publisher of The Landscape, a four-page monthly that he wrote and printed in his home at the top of East Allendale Road on the corner of Chestnut Ridge Road in Saddle River. Smith wrote in later years that when he started his little paper in 1881, it was “the only newspaper in Bergen County north of Hackensack.” Smith also claimed to be descended from the same family in Rockland County as the noted abolitionist Garret Smith.
This year’s special guest speaker, Arnold Brown, has been exploring the history of African Americans in Bergen County for many years, with a special focus on A. P. Smith. He has filled in the profile of this talented man. Come and hear what Mr. Brown has discovered.
About the Speaker: Arnold Brown was the first African American elected to represent Bergen County in the New Jersey Legislature. He grew up in Englewood and graduated from Bowling Green University and Rutgers University Law School. As an adjunct to his research, he is the owner of DuBois Book Center in Englewood, which features books on African American history.
March 14- The Story of Cragmere ParkIn Memoriam: Carol Clinger

April 30- Women of the Ramapough Lenape Nation (with Ringwood Library)