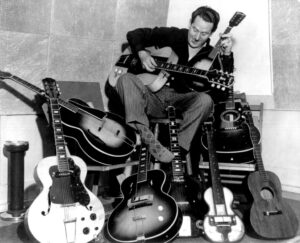 A Permanent Exhibit at the Mahwah Museum

The Mahwah Museum has a small but rich permanent exhibit featuring several historical aspects of Les Paul’s life and career.  Visitors can learn about his inventions and innovations including sound-on-sound recording and electric guitar features while viewing a display of one-of-a-kind precious guitars made especially for Les set in and around a re-creation of the studio in which Les did his work.

Learn how this creative genius transformed rock, country and jazz music genres as we know them today.  Get a sense of how he and Mary Ford performed for their weekly radio show from their home in Mahwah.

The legacy of Les Paul lives on, not only through the Mahwah Museum, but through his family, fellow musicians and the Les Paul Foundation.  For more information, please click on the links below.

Gene Paul is Les’s son.  He honors his father on this dedicated website:

Lou Pallo, a member of Les Paul’s Trio, has long made available a documentary and album (available on Amazon and Spotify):

This site includes a timeline and a style guide:

The Les Paul Foundation inspires innovative and creative thinking by sharing the legacy of Les Paul through support of music education, recording, innovation and medical research related to hearing:

The Les Paul Committee meets throughout the year, and plans programs and workshops.  If you would like to join the committee or have questions about the exhibit, contact the Les Paul Exhibit Chair using the contact form below.