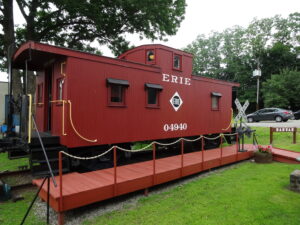 Why Save Our Caboose?

Help to save one of Mahwah’s most treasured historic sites – the 1929 Erie Caboose 04940! Mahwah’s 1929 Erie Caboose is located behind the Old Station Museum at 1871 Old Station
Lane. Together they are a large part of the rich history of Mahwah, being a critical factor in the economic and community development as a town. While renovated in 2009, the car serves as a teaching tool for visitors and students alike. There is a recreated living space, exhibits about lanterns, equipment, and tools, different types of cabooses and even a display that teaches you Hobo language!

Cabooses, however were not made to stand still and consistent exposure to the elements has caused significant water damage to the siding and windows. The best way to preserve the
caboose for future generations is to house it under a pavilion that will shield it from the rain and snow.

The Mahwah Historic Preservation Commission and the Mahwah Museum are partnering to raise awareness and funds to Save Our Caboose. A generous matching pledge has been
received from Liberty Hyundai and the DeSilva Family. They will match funds raised up to $50,000! Pavilion costs and needed repairs are estimated to cost over $100,000. We are asking our community and partners to save and preserve old 04940! Do what you can and donate. See below for special store items, offers and ways to donate!

We are also thrilled to announce that from now until Mahwah Day your dollar goes twice as far to help Save our Caboose! This opportunity is made possible by the incredible generosity of the DeSilva Family of Liberty Hyundai, who have pledged to match donations up to $50,000!

**We wouldn’t be able to do this without the generosity of our supporters!**

The Erie Caboose and Old Train Station complex have become our de facto Town Center, Memorial Day and Mahwah Day Parades pass by, Township ceremonies like the 9-11 Remembrance take place with this complex as the backdrop. The Old Train Station is the literal symbol of the Township, featured on the Town seal. We need to come together and take pride in our town and preserve this very special part of Mahwah’s landscape. To get involved, or for updates, email Historic@MahwahTwp.org.

You can also check out the Save the Caboose! items in our bookstore!

T-shirts are available here. Use code caboose10 to save $10 when you buy 2 shirts!

The story of Erie Caboose 04940 begins with an order for 25 Northeast-style cabooses for the Erie Railroad in 1929. The order was placed with the Magor Car Company located in Clifton, New Jersey. Magor was a leader in manufacturing freight cars for the major railroads. Northeast-style cabooses were short in length (ours is 21ft. long), and known for their signature center cupola on the roof. The cupola provided the crew with a way to inspect the train while it was in motion. Cabooses were not assigned to any particular region of the railroad. They traveled to all areas of the railroad, serving as the hotel and office for the train crew. The caboose was a very utilitarian-type car with very few high-end comforts. Our caboose served both the Erie and Erie Lackawanna from 1929 through 1968. It passed our current railroad station many times during its years of service. It was retired by the Erie Lackawanna in 1968 and was to be sold for scrap. John Y. Dator was a founding member of the Mahwah Historical Society (the ancestor of our Mahwah Museum). He was able to obtain the car for our newly-formed Old Station Museum. The railroad brought the car down from New York State and delivered it to the American Brakeshoe train yard. From there it was lifted onto a flatbed trailer and trucked to our museum site. Once here, a crane was used to place the wheels and the body on the tracks. The caboose was totally stripped when we received it. The museum worked to restore the car and in 1970 opened it to the public for display. It is one of only two cars from the original 1929 order in existence.

In 2009 the museum renovated the interior of the caboose to recreate some of the living space. The renovation included reconstruction of one of the four bunks, the folding table used for food and entertainment, the desk for doing paperwork, the clothes closet, and cupola seats. There would also have been a wood- or coal-fired stove for heating and cooking. There was a toilet in the car; however, you could not use it if you were stopped in a station.

Today the car serves as a teaching tool for our visitors, highlighting the freight side of the railroad business. In addition to the recreated living space, there are exhibits about lanterns used by the trainmen, tools used along the tracks and on the cars, and the different types of cabooses that existed. There’s even a display that teaches you how to communicate in Hobo language.

We were featured on northjersey.com! Click here for the video & article!