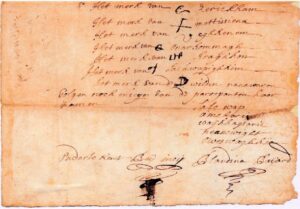 The Life and Times of Blandina Kirstede Bayard

Blandina Kirstede Bayard, known for establishing an Indian trading post on the banks of the Ramapo River in Mahwah in 1700, is regarded as one of New Jersey’s first female entrepreneurs even though she saw herself as a merchant of Manhattan. Blandina was born in 1653, growing up in Manhattan in a large house facing the market square where Indians came to trade furs. In 1666, when she was 13, the English took possession of Manhattan allowing those Dutch citizens who pledged allegiance to the British Crown the right to stay in their homes and build a prosperous colony. In 1674, a year after the Dutch briefly reclaimed Manhattan, Blandina married Petrus Bayard, nephew of Peter Stuyvesant. Blandina was fluent in Dutch, English, and the indigenous trade language of the marketplace. She was able to participate in many of the negotiations for land and goods happening in these turbulent times. This presentation will explore how the times she lived in brought Blandina Bayard, a female merchant of Manhattan, to the edge of the wilderness here in Mahwah.

Nancy Gibbs is a historian who has collaborated with Ed Lenik for decades.