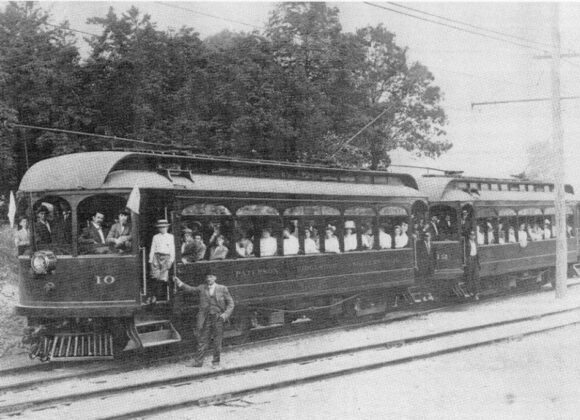 In an era before most people could afford automobiles, the trolley provided economical mass transit. Dreamt to run from Suffern through Paterson, the North Jersey Rapid Transit Trolley ran from 1908 and 1928. Its unfortunate demise came when two trolley’s collided tragically head-on in Glen Rock. Yet, the tracks lived on to service the Trans-Siberian Railway that ran from Moscow to Vladivostok. See the fascinating trolley artifacts of the North Jersey Electric Railway Historical Society on special loan from the Liberty Historic Railway. View the incredible one-of-a kind, exact-to-scale Hollis Bachman Model Trolley Collection, and delight in the moving miniature NJRT trolley railway. Mahwah’s 1929 Erie Caboose will also be open for special viewing during this exhibit. See it all at the Old Station Museum located at Old Station Lane, adjacent to the Mahwah train station, Ramapo Avenue. Open Sundays 2pm – 4pm, June 26 – Sept 26. Suggested donation $3.00 adults, children free.

Dream of the trolley in Northern Bergen

In 1908, Cragmere was designed to be a planned suburban development, one of the first such communities in New Jersey and, partly in response, a trolley line was envisioned to run from Suffern down to Paterson, an industrial center. It would then continue onward through Rutherford and Hoboken and finally into New York City, providing a needed commuter line. The project was started in East Paterson and by the summer of 1910 the line was completed to Ridgewood. The full line from Suffern to Paterson opened in June 1911. The system was 15 miles long and cost less than $2 million to construct. The line never expanded beyond Paterson and after only a few years of operation, a tragic head-on collision precipitated the end of the NJ Rapid Transit line. The tragedy, coupled with the emergence of competitive bus lines and the increasing popularity of the private automobile, spelled the demise of the Trolley.  Rail Operation for the North ceased on New Year’s Eve, 1926. Ultimately, the NJRT rails that were ripped up were shipped to Russia to become part of the Trans-Siberian Railroad, which would become the world’s longest electric railway at 6,000 miles long. So, despite the short operation period, the NJRT lines themselves survive. The Trans-Siberian Railway was completed in 1916 connecting Moscow, on the western edge of Europe, to Vladivostok, on the eastern edge near the Sea of Japan.

The Mahwah Museum features a display of one-inch-scale models of North Jersey Rapid Transit (NJRT) trollies created by Hollis Bachman, a mechanic by trade and a trolley enthusiast.  Following a blueprint of the original, he created models using tin cans, pieces of antique glass with detailed parts, including doors that fold back, seats that reverse, and windows that raise and lower.  The Museum acquired an extensive set of Bachman trolley models, which are currently on display at the Old Station Museum at 171 Old Station Lane, adjacent to the Mahwah Train, as part of the  North Jersey Electric Railway Historical Society and the Liberty Historic Railway exhibit.