Thank you for joining us for our Virtual Celebration of Les Paul’s 105th birthday!

The Mahwah Museum was pleased to present an online concert series during the weekend of June 6-9 to celebrate Les Paul’s 105th birthday with Lou Pallo (with Vinny Raniolo & Gary Mazzaroppi), Muriel Anderson and Thom Bresh.  On June 9 a Zoom event, A Conversation with Gene Paul, was featured.

Viewers may see the performances on the Les Paul in Mahwah Facebook page or go to YouTube and search Les Paul At 105, or click the links provided below. 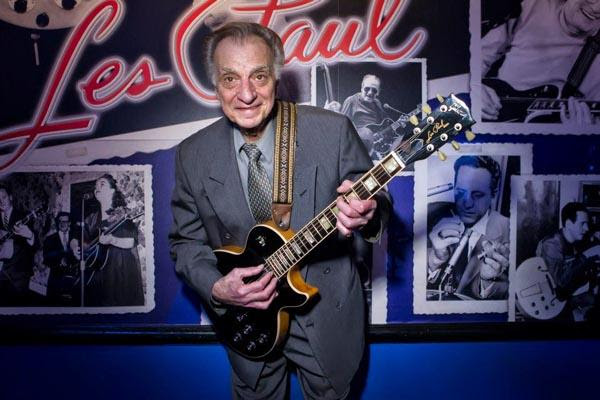 Lou Pallo played regularly with Les for over 30 years at Fat Tuesdays then at The Iridium. In an interview, Keith Richards of the Rolling Stones described Lou as “ an incredible guitar player” and the man “who knows a million chords”. In addition to Les, one of Lou’s early influences was Tony Mottola. Lou has worked with a wide variety of celebrities from Sammy Davis Jr., Nat King Cole and Ella Fitzgerald to Mr. Richards himself.  Joining Lou Pallo were special guests Vinny Raniolo & Gary Mazzaroppi.

On June 6 at 7:00 PM EDT, Muriel Anderson performed a 45-min set to honor her friend Les Paul. Harp-guitarist and former National Fingerstyle Guitar Champion, Muriel is host of the annual All Star Guitar Night, where she once co-hosted a show with Les Paul at the Ryman auditorium.  On this historical video, join her for music and memories of back-stage moments with Les. murielanderson.com/now

Thom Bresh was born in Hollywood, California and raised in the midst of guitar royalty. His father, Merle Travis, was one of the most influential American guitarist of the 20th Century. With this sort of heritage and upbringing, what do you have? As Chet Atkins put it, “Thom Bresh is a “World Class” guitarist that deserves to be heard.”  bresh.com/

At the final event on June 9, a Conversation with Gene Paul was facilitated in virtual Zoom format by Charlie Carreras, Vice President, Mahwah Museum, Professor Emeritus of History, Ramapo College.   During this conversation, Gene shared several stories and memories of his father.

Carrying on the music technology of his father Les, Gene Paul  is an audio recording/mixing/mastering engineer, producer and musician. He was an engineer at Atlantic Recording Studios during their famed 1960s–80s period and is currently the chief mastering engineer at G&J Audio, a mixing and mastering studio for major and independent labels focused on reissues and new recordings.